The wolf’s effective hunt of large prey and striking, soulful appearance have attracted both haters and lovers of this wild predator.

Wolves were so despised that the U.S. government established a bounty program that helped to eliminate all but a few hundred wolves in the United States by the 1930s. But thanks to the Endangered Species Act, the wolves are successfully being reintroduced to their place in nature, and it is the raven who loves its new ecosystem partner. 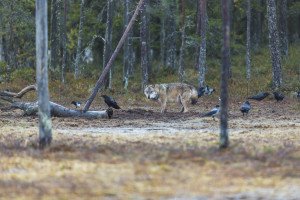 Much like their human counterparts, ravens and wolves have formed a mutually beneficial relationship in which they seem to both respect and engage each other in playful activities.

Although many animals benefit from a wolf pack’s kill of an elk or deer, the ravens are first on the scene. Yellowstone National Park biologists have closely studied the gray wolves which were reintroduced to Yellowstone in 1995 and found that it is the raven who has benefited the most from the wolves. The average number of ravens present at a wolf kill is 30 – and up to 135 have been recorded to eat from the leftovers. Adirondack Wildlife, Inc. has reported a new study suggests that the real reason wolves hunt in packs is “to minimize the portion of a carcass lost to ravens!” These birds constantly carry away chunks of meat and can steal up to one-third of an animal carcass.

While it may appear that the ravens just take advantage of the wolves, Bernd Heinrich, author of Mind of the Raven: Investigations and Adventures with Wolf-Birds, writes that the ravens repay their wolf benefactors: “At a kill site, the birds are more suspicious and alert than wolves. The birds serve the wolves as extra eyes and ears.” 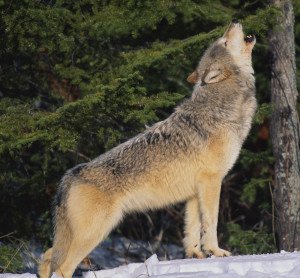 When not competing for their next meal, wolves and ravens also play with each other. Observers have seen ravens dive at the wolves and then quickly fly away. Ravens may peck at the wolves’ tails to get the wolves to chase them, or the ravens may be teased themselves by wolf cubs chasing after them.

While their relationship with ravens has certainly produced an odd couple in nature, wolves have also created a staggering effect on the natural ecosystem as a whole. The Yellowstone National Park wolf restoration program has been intensively studied and the wolves have provided a greater understanding of the importance of their role as a predator in maintaining the integrity of the entire ecosystem. They remind us that “in nature everything is connected to everything else” (from “The Wolves of Yellowstone,” Brooks/Cole division of Thomson Learning, Inc.).

Be amazed by other wolf activity seen in the video “How Wolves Change Rivers”. Want to observe these fascinating creatures firsthand? Check out these 5 ecology careers to get you outside.