Want to take to the skies? You can be a Drone/UAV Operator and command the flight of an unmanned aerial vehicle gathering aerial intelligence around the world or filming a televised sported event … and you never have to leave the ground!

How cool would it be to fly drones for a living? Even though it might seem that you would just be taking a video game one step further, operating drones or unmanned aerial vehicles is a serious job. Pilots must be trained to become skilled operators and be able to fly drones safely, efficiently, and within the Federal Aviation Administration’s regulations.

I know, I know – you think you are already pretty good with your remote-controlled helicopter, why do you need more education? UAVs and drones can be any size or shape and can go from that small hand-held helicopter to very large systems that cost millions of dollars and weigh thousands of pounds. Drone operators are trained pilots and certification is required.

Drone/UAV pilot training is available at the Unmanned Vehicle University in Phoenix, Arizona, where students are required to go through 16 hours of ground school, 10 hours of simulation, and 16 hours of flight training to earn a Drone/UAV Pilot Training Certificate. Drone University USA in Sacramento, California, also offers a commercial operator training and certification program. 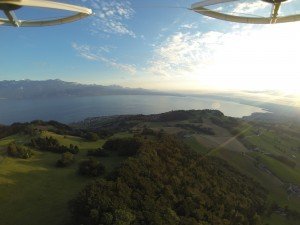 College majors in Unmanned Aircraft Systems are available at Embry-Riddle Aeronautical University, which has campuses in Daytona Beach, Florida, and Prescott, Arizona, as well as the University of North Dakota’s John D. Odegard School of Aerospace Studies. Bachelor of Science degrees are earned in a four-year program at both colleges, which recommend students have a good math and physics background. Embry-Riddle offers both a pilot or non-pilot track of choice for students. Both schools use simulators for complex drones and actual commercial-sized UAVs for pilot training.

Military training is another option for future drone/UAV operators. The Army requires that you first take the Armed Services Vocational Aptitude Battery to determine whether you are suited for this job. The training requirements are 10 weeks of Basic Combat Training and over 23 weeks of Advanced Individual Training with both classroom and field instruction. The Air Force requires UAV flyers to be commissioned officers, so you must first get a college degree and attend Officer Training School. Further training is then provided to the officers. Opportunities also exist in the Navy and Marines for drone/UAV operators.

Following graduation, drone/UAV operators can earn at least $60,000 and as much as $100,000 if they are willing to be deployed, according to Paul Snyder, assistant director for extension programs at the University of North Dakota. The military has long used UAVs for gathering aerial intelligence, but commercial pilots are also in demand and the field is growing rapidly with comparable starting salaries for drone/UAV operators.

The opportunities are almost endless for a drone/UAV operator. Military jobs have pilots conducting air reconnaissance, surveillance, and targeting and acquisition missions, which can be continued in civilian careers with the Central Intelligence Agency or National Security Agency. The largest potential market currently is precision agriculture in which drones help farmers monitor crops and carry out high-efficiency spraying techniques.

Drones that will serve as wireless broadband stations are being developed by Ascenta and Titan Aerospace for people who currently have no broadband service access. Other commercial uses are movie production, television coverage, weather monitoring, migration research, disaster management, mapping, and oil and gas exploration, just to name a few. The University of North Dakota reports many of their drone pilot graduates have accepted positions at Northrup Grumman, Lockheed Martin, General Atomics, and Boeing – all major drone manufacturers.

Enjoying what you do every day makes work seem more like play. So take that fun of flying, learn all you can about the operation of drones, unmanned aerial vehicles, and unmanned aerial systems, and get paid to do what you love!