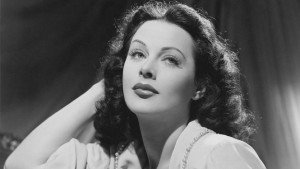 Known as one of Hollywood’s most glamorous starlets during the Golden Age of film of the 1930s and 40s, Hedy Lamarr was in demand for her acting chops, but also made contributions as a pioneer of women in engineering. The Austrian-born Lamarr’s patented Secret Communication System was developed to avoid enemy interception of the messages through which the military’s radio-controlled missiles were deployed. This technology served as the foundation for the wireless communication that we know today.